7 Things Any Man Can Learn from Fifty Shades of Grey 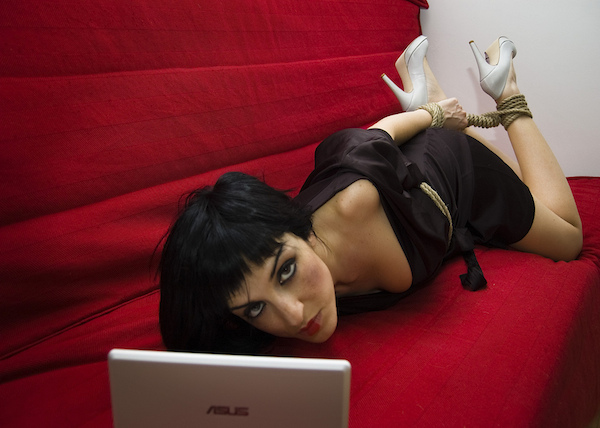 Pick up a copy of Fifty Shades of Grey and start taking notes. Jordan Gray says that there are seven things that men can learn from Christian Grey.

Ever heard of Fifty Shades of Grey?

It’s a recent cultural phenomenon loved (and hated) by people of all ages.

And before I dive into it…

Yes, the books are terribly written.

Yes, the books were written as Twilight fan fiction.

And yes, the books represent a laughably unrealistic viewpoint of what kink/BDSM relationships look like.

BUT… to not try and learn something from a book series that so clearly hit a nerve on such a massive scale would be silly.

So here’s what you need to know…

A virginal 21-year old student (Anastasia Steele) meets a super sexy/successful 27-year old billionaire (Christian Grey) who happens to take a liking to her. Christian also happens to like kinky sex. They like each other, they fight, they make up, they have a lot of kinky sex, they fall in love, the end.

Here’s the thing that you actually need to know…

The book sold over 100 million copies and was one of the most purchased books in the history of human beings. Why? Because the book tapped into something about human sexuality at the right time. What exactly did it tap into? The fact that a lot of women are sexually frustrated and want to live out explorative sexual fantasies with a leading character who they respond to.

And this is the reason why I had a brain-boner throughout the entire book… the way that the author portrayed Christian Grey was brilliant. Having studied attraction, romantic love and psychology for the past decade, seeing what the author was layering into Christian was just so smart and culturally well timed.

As much as some guys (I would assume that less than 10 percent of the original Fifty Shades readership was male) want to attribute Christian’s attractiveness to his money or ripped abs (hint: so not those things), there is some pretty smart writing going on in terms of how the character was structured.

So what is it exactly that makes Christian Grey so attractive to over a hundred million women?

Here are the seven things that you can learn from Christian Grey that will help you be a better boyfriend/husband/partner.

Christian is supremely single minded when it comes to Anastasia. He’s focused on her, and only her.

He doesn’t squander his attention or sexual energy on other women in any way. If there is a gorgeous woman within sight, he doesn’t take his eyes off of Anastasia for a second.

While his character takes it a bit too far at times (she refers to his superior “stalking” abilities repeatedly in the first two books), this kind of laser-beamed attention is intoxicating to so many women who have never experienced anything close to it. Especially younger women who have grown up in a dating culture where the cultural narrative says that it’s alright for a guy to text message her a vague sign of interest in order to initiate a first date.

Christian wants Anastasia, and he is clear in his intent.

Christian unapologetically craves Anastasia. He is a calm, controlled man with a healthy relationship to his sexuality and he finds Anastasia absolutely captivating. He lusts after her like most women have never experienced in real life.

It’s an aphrodisiac to feel someone’s eyes on you from across the room (something that she does several times throughout the trilogy).

Action steps: dive into your relationship to your sexuality. Figure out exactly what it is you respond to in the bedroom. Don’t be afraid to experiment with new things that you think you might enjoy. Work through any mental or emotional blocks you have surrounding sexuality from past trauma or conditioning.

It’s not the fact that Christian has billions of dollars or a chiseled torso that women find attractive—it’s what those things say about him as a person. The external markers of success and health speak to his unrelenting drive and passion for what he does in his life.

It’s not that he has strong muscles, it’s the fact that he has a strong enough of a mind to have earned those muscles. And it is much the same in real life. Most women aren’t attracted to rich men because they have lots of money as much as they’re attracted to those kinds of men because those men are self-aware, driven, and actually care enough about something in their lives that they want to chase it down and conquer it.

Action steps: figure out what you’re passionate about and follow it with abandon. Don’t be afraid to chase down every single one of your dreams no matter how outlandish or socially out of the box they seem. Always be improving as a person. If he was only ever sexually aggressive with her then it would get old fast. Predictability is death to sexual passion. It would be like if someone learned how to play one chord on a guitar and then only played that one chord over and over again (whereas knowing just four or five chords enables you to play entire songs that are much more emotionally engaging). Christian is the opposite of someone who knows how to play one chord. In fact, he is described as “mercurial” 17 times in the trilogy.

When Christian isn’t tying up/spanking/flogging Anastasia, he frequently holds her, caresses her, adores her, and kisses her on the forehead. He is strong, and soft. Aggressive and sweet. He is all things in an ever-changing hurricane of masculine energy.

Action steps: love and compliment your woman. Be sweet to her when she’s sick, grumpy, or having a rough day. Kiss her on the forehead, play with her hair, make dinner for her. Be a good partner.

Christian knows who he is and what he wants out of life… so when he decides that he wants Anastasia… it actually means something. Most guys choose a woman because they choose him first or simply because of how they look.

Christian has standards. He has insanely strict standards in fact. He orders a simple gin and tonic with about 30 hyper detailed words of specificity. The man knows himself. So his decisions mean something. He does not have low standards in any area of his life.

Action steps: make firm decisions. Stop settling when it comes to matters of your integrity. Feel passionate about something and let it show. Don’t be afraid to lead your dates. Proactively communicate to your partner things that they can do to make you even happier, and strive to do the same for them.

Christian is always in control of himself. He is super capable because he decided early on in life to regularly invest time and effort into developing a wide range of abilities. Simply put, he is hyper intentional about his life. He believes in self-mastery and is always looking for ways to challenge himself and improve as a person.

And it would be so easy to scoff at this book and say “This is an impossible level of greatness to achieve… these kinds of guys don’t exist in real life.” And you’re probably 100 percent right. The number of 27-year old self-made billionaires in the world is next to non-existent. But I have several friends in my social circle that come very close to how Christian is described throughout the trilogy.

I have one friend who is under 35 and has completed over 10 IronMan competitions across the world while running a massively successful home-based business and being one of the greatest husbands and fathers that anyone could ever hope for. I have another friend who wrote and published over 20 books by the time he was 25 years old (while living with his beautiful wife in Hawaii). And yet another friend who worked at Apple for over a decade, owns and flies his own aircraft (just like Christian Grey), is a former pro-surfer, and is one of the sweetest and most loyal men on the face of this planet.

These men exist. And I don’t say this to boast that I know them… I’m saying this to dispel the idea that someone can’t be successful, fit, and emotionally intelligent at a young age… or at any age.

Action steps: live your life on purpose. Commit to growing as a person every single day. Challenge your comfort zones by traveling as often as possible and taking on new skills.

7. Willingness To Be Vulnerable

Christian has a mean history of trauma and abuse in his early life. It’s part of what drove him to succeed to the extent that he did. And one of the most endearing qualities of Christian as a character is that he slowly lets Anastasia into his emotional world and he lets her help heal his emotional wounds.

Modern men are raised with such a shamed mentality around their emotions.

Because of socially conditioned ideas like these being hammered into us, we also tend to intuit the lesson that women will lose attraction to us if we ever DO let them see us sweat/suffer/have a moment of “weakness.”

In reality, a quality woman will genuinely want to be let into your emotional world. She knows that you have some cracks in your proverbial armor because everyone has emotional wounds in their past to be worked through. Holding her back from letting her see you is like repeatedly denying her something she desperately longs for. She wants to be let in. And not to judge you or think any less of you… but to help heal your heart with her feminine nurturing and love.

While Christian doesn’t dump his past and heavy emotional baggage on Anastasia upon first meeting her (as he shouldn’t), he slowly lets her know more about him as he grows to trust her more through their relationship. This is the essence of healthy, high-functioning boundaries… he lets her in because he trusts her, and women (like all people) want to feel like they are trusted.

Action steps: let your partner see you. Don’t be afraid to share your secrets with people you trust. Let your lover in to your world and trust that they have your best interest at heart.

Are There Any Christian Greys Out There?

You don’t need to be every single one of these things in order to attract a partner or maintain a thriving relationship. But if you found yourself thinking “I might have some work to do,” then you’re already on the right path.

This article originally appeared at JordanGrayConsulting.com in partnership with the Good Men Project.