Brad Feld Opens Up About Sex, Being Present & Communication As part of his entrepreneurial expertise, Brad Feld understands the necessity for clarity of language. Learn how he applies that same precision to love.

MeetMindful: Language is key to any relationship and certainly a relationship that’s going to last. Looking back to when you and Amy began dating, how would you have paid more attention to this?

Brad: Like many new couples, we talked a lot about our relationship, especially before or after sex. Think back to the beginning of your relationship, back when you were having crazy, monkey sex every day. Yup, sometimes you had a relationship conversation that led to sex, sometimes you had a fight that led to makeup sex, and often when you were laying around after sex, your conversation drifted to the future and all the wonderful things you are going to do together, which often leads to more sex.

During the first few years of our relationship, Amy and I talked about a wide variety of topics. We spent a lot of time on our aspirations, things we wanted out of life, things we had struggled with in past relationships, and things that were on our mind. Sure, we talked about politics, sports (especially tennis, which I introduced Amy to), Boston and how much we wanted to move somewhere else (we eventually did), my company, and Amy’s writing. But often our conversations drifted to our relationship or things in the moment going on between us.

At the time, I didn’t appreciate how often one of us didn’t understand what the other was saying. Sure, we understood the words, but we didn’t understand the patterns or the meanings behind the words. One of us would say something that was intended as feedback or a request for help of some sort, but instead it was interpreted as criticism or an attack. One of us would try to express a desire, but it would be interpreted as something else. And often, especially when one of us was tired from work, we’d just complain or vent, when the other was also tired. Not surprisingly, arguments arose from these conversations.

Amy is much fiercer than I am. When she is attacked, she attacks back. After a while, we started talking about our arguments as “mutually assured destruction” —if I continued to escalate, she would escalate more, and the only result was global thermonuclear war.

From this realization, we started to understand how much words mattered. When we found ourselves in conflict, we’d step back and start talking about our feelings. I stopped trying so hard to solve problems or satisfy what I thought Amy wanted. Instead we slowed down and talked about what was going on. And while our conversations took a “meta” turn on occasion, where we’d talk at a “meta-level” about whatever we were talking about, we started to build clear patterns into our language.

I learned which words triggered Amy and used them cautiously. She learned which words set me off or made me feel bad, and she started to be more careful. We didn’t avoid conflict, but rather approached it thoughtfully, especially with the language we used.

We learned how important words were. We both love words, language, reading, and writing, so this came naturally to us once we understood how important—and impactful—the words could be. 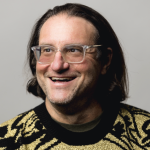 Brad Feld has been an early stage investor and entrepreneur for over 20 years. He lives in Boulder, Colorado and Homer, Alaska with his wife and is on a quest to run a marathon in every state in the US. Brad has been an early stage investor and entrepreneur since 1987. Prior to co-founding Foundry Group, he co-founded Mobius Venture Capital and, prior to that, founded Intensity Ventures. Brad is also a co-founder of TechStars. In addition to his investing efforts, Brad has been active with several non-profit organizations and currently is chair of the National Center for Women & Information Technology, co-chair of Startup Colorado, and on the board of UP Global. Brad is a nationally recognized speaker on the topics of venture capital investing and entrepreneurship and writes the widely read blogs Feld Thoughts, Startup Revolution, and Ask the VC. Brad holds Bachelor of Science and Master of Science degrees in Management Science from the Massachusetts Institute of Technology. Brad is also an avid art collector and long-distance runner. He has completed 23 marathons as part of his mission to finish a marathon in each of the 50 states.