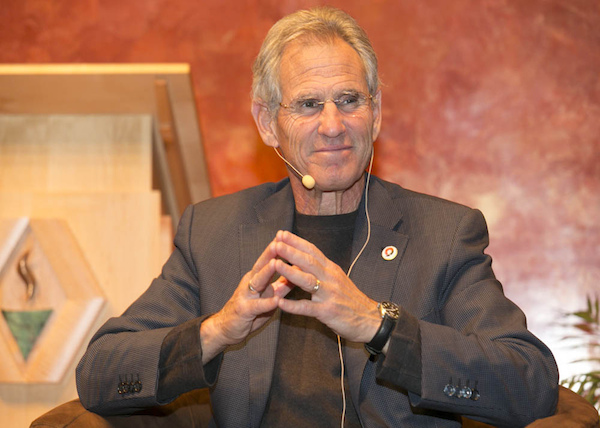 Our Mindful Man of the Month for June is Jon Kabat-Zinn, a man who has done astounding work to bring mindfulness practices into the mainstream.

The sound of the word alone makes me grind my teeth. It’s that white-knuckled sensation that manifests itself in so many terrible ways.

Stress can lead to heightened anxiety, depression, physical pain and mental anguish. It can cause sleepless nights—at the end of which you want to stay in bed—and it can make every already difficult part of life seem unbearable.

Everyone tries to cope with stress in a different way. I have tried to combat stress in mostly unhealthy fashions. I have chewed nails to the cuticle, smoked cigarettes, imbibed alcohol and even taken medication for a while. None of this bodily abuse or mental purgatory significantly reduced my stress level or the symptoms of it.

I have always thought and hoped that there must be a better method, a more simple, reasonable, clean method.

The Man Behind the Method

Jon Kabat-Zinn has been using mindfulness meditation to help people improve their health for 35 years. He is an innovator and a leader in integrating mindfulness treatment and modern medical practice. He is regarded as a pioneer in bringing Eastern philosophy into the world of Western science.

Kabat-Zinn believes and has scientifically proven that mindfulness can aid in our battles with stress, anxiety, pain and even illness. But it is “stress” that became his keyword when he began developing his treatment program many years ago.

In 1966, he was a graduate student at MIT. He was studying under a Nobel Laureate in medicine on his way to earning his PhD in molecular biology; but it was another professor, of philosophy and religion, who introduced him to meditation for the first time.

After graduating in 1971, Kabat-Zinn became a Professor of Medicine at the University of Massachusetts Medical School; and following a few years of residency, he became aware that a high percentage of patients were not getting better. He spoke to physicians and found that they felt that only 15 to 20 percent of their patients were helped by the treatments they practiced.

It was in 1979 that Kabat-Zinn wrote a proposal and was granted permission to start a clinic that employed mindfulness meditation in treating the 80 to 85 percent of patients that were being left behind by Western medicine.

That clinic was called the Stress Reduction Clinic. The title was chosen carefully, because it was being founded at a time when most people thought of meditation and yoga as whimsical practices of the counterculture. Any mention of “mind/body treatment” or “alternative medicine” might not have been well received.

By using the term “stress,” he felt he could reach a larger group of people, because stress is a concept that is universally accessible. In his own mind though, he was using the word to describe the Buddhist term for “suffering”; so he intended for the program to help people in all types of anguish from the beginning.

Kabat-Zinn admits that he was lucky to have been allowed this freedom of practice at such a time in the United States. His stellar reputation in the academic arena certainly garnered this buffer and improved his chances.

“Partly because I had a PhD from MIT in molecular biology and had studied in the lab of a Nobel Laureate, people projected onto me that, ‘He must know what he’s doing’. So they let me do it, fortunately. They had no idea how much not-knowing was involved.”

The result of that freedom and fortune was an eight week program called the Mindfulness Based Stress Reduction (MBSR) course. It employed meditation, dialogue, reflective inquiry and mindful yoga and movement in the treatment of patients.

What started with reputation and a bit of luck grew because of science and research. A randomized clinical trial on psoriasis patients showed that a group that was exposed to mindfulness meditation in addition to ultraviolet light therapy actually healed more quickly than a control group that underwent only ultraviolet light therapy. In another trial, some members of a work force engaged in mindful treatment while others did not. At the end of that trial, every member of the work force was given a flu vaccine and those individuals who had been treated with mindfulness meditation showed stronger immune system responses.

The success of these trials along with other affirmative research allowed MBSR to proliferate. Today, more than 20,000 people have gone through the program and more than 12,000 medical professionals have been trained worldwide. It is practiced in over 700 locations and has even started to reach schools to combat issues like bullying.

So it’s working. But if it is regarded as so successful, it is probably important to address exactly what “it” is.

Following days of research on this mindful guru, I was having trouble breaking into this article. I wanted to portray a solid history and representation of the man, but I didn’t want it to read like your run-of-the-mill newspaper article. My solution was to try one of his guided meditations. I thought that at the very least it would provide me with some new perspective.

Prompted by Kabat-Zinn’s voice, my first session was a 25-minute long body scan. It involved lying on my back in complete stillness and silence while focusing on one specific part of my body at a time and being aware of the sensations in that particular region. The biggest challenge was trying to be non-judgmental as to the sensations I was experiencing. Our brains have preprogrammed the way we feel about pain and discomfort; but you are supposed to experience them just as you would warmth or tingling, as something that just “is” in the moment.

This first session was not enough to rise up from and exclaim that my life had been changed, but one result was noticeable immediately. My writer’s block was gone. I got up from the floor, sat at my laptop, and began to type. I had a way into this article, and my head seemed to be more clear than it had been in days.

Although I did my best to maintain my attention and focus in these moments, I did have beginner’s doubts as to whether or not I was meditating correctly. Kabat-Zinn’s own words from an interview with Mindful brought me comfort about my nascent effort. “That’s the beauty of it. It’s based on not-knowing—approaching the world inquisitively, with a fresh mind.” He points out that the practice is successful because people don’t try to gain from it. They simply learn how to be comfortable as they are.

My second attempt at meditation came on the morning that I finished this article. Again, I emerged from the session with an apparent clarity of thought, but I quickly became aware of another sensation.

I was wearing my best smile.

As I sat down to write, I felt gratitude and compassion for being allowed to do what I care for so much.

Jon Kabat-Zinn’s perspective on compassion being a key element in his work appeals to me as an incurable romantic who always wants to believe that love is the governing principle in our existence.

Pointing out that the words for “mind” and “heart” are the same in Asian languages, he expresses belief that if “heartfulness” is not an implicit part of mindfulness, it is not being fully understood.

The Mindful article on Kabat-Zinn is entitled “No Blueprint, Just Love.” Being prompted to speak on what makes MBSR work, he said something that affected me more than any other quote I read while researching. I see these words as enough to convince anyone to try mindful meditation.

“What truly makes mindfulness training work is love. If the teacher holding the class is profoundly in love with what they are doing and with the people in the class in a fundamental way, it will work.”

For a short biography covering the rest of Kabat-Zinn’s accomplishments, click here.

To listen to a full lecture he gave on “The Healing Power of Mindfulness” at Dartmouth College, click here.