5 Signs Your Date is Into You 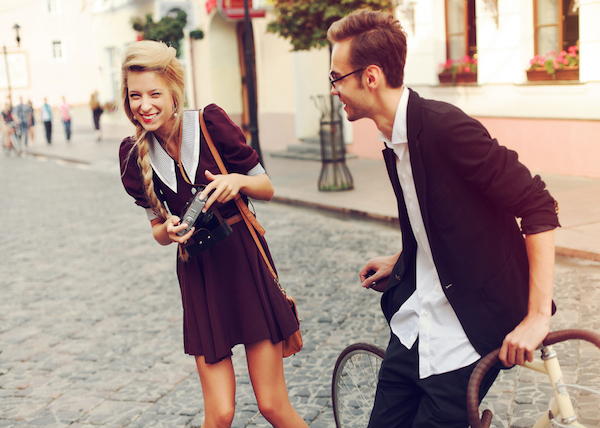 Things are going well (you think). Your date is into you (you think). Take the guesswork out of romance, Darling. Check out these clear signs, instead.

The ever-resent question: how do you know someone’s into you?

As a constant over-thinker, I’ve spent what amounts to years of my life determining whether or not people were attracted to me, and even more time deciphering what exactly they wanted from me.

I believe in sparks.

I believe in them wholeheartedly and believe they will be present when I find my person.

So how does a spark manifest itself on a date? Or after a date? How do you show someone you’re into them—or know if they’re into you?

I have a specific date that I call my “snowglobe moment.” Actually, someone else called it that first and I adopted the phrase because it most perfectly describes the entire experience—it was complete perfection; as if we were existing in a snowglobe.

Perhaps it sounds odd to say I actually made eye contact with someone from across the room and realized right then and there this was going to be something, but I did.

And later someone introduced us and there was a realization that this should be something. So I told him what bar I was going to, and mentioned he and his friends should come hang out.

And he showed up.

That sounds simple, but sometimes sparks are simple. If someone’s into you, they’ll show up. They’ll be interested enough to forget the games.

There are few things more frustrating in life than repeating yourself.

My date remembered where we were meeting and when. He remembered the small-talk details; where I lived, what I did for a living and possibly even a hobby or two.

Our brains store new people and the details of their lives in our short-term memory (obviously); it takes effort to remember any detail about a new person. We only remember the things that are important.

We’ve all been on dates where we spend hours wondering whether or not the other person realizes there’s someone else at the table, because all they’ve done is talk about themselves.

A lesson I’ve (finally) learned is when someone is into you, they ask you questions. They don’t talk about themselves for three hours and then forget what you do for a living because they were too busy telling a story about a trip they went on last week or some cool new bar they went to.

They actually give a shit about what you have to say—and ask questions so you’ll say more.

I guess people are shy sometimes, but guys that are interested in me have never been shy about trying to get as close as possible.

This doesn’t need a ton of explanation—if your date is trying to get closer, they’re into it.

There are two very different points to be made about phones on dates.

1) If your date hasn’t looked at theirs once (or even more than a few times) on your date, they’re into you. I know this because the first thing I do when I don’t want to be somewhere is start looking at my phone. It’s how most people deal with situations they don’t want to be in.

2) I’m not a real stickler for rules on calling after dates. I just know that if someone is calling afterward, they’re interested. Within reason, of course. I’m definitely not going on a second date with the guy who calls a month later, that’s a whole different story. But within a week—definitely. If they’re calling, they’re into you.

Note: stop asking people out in text messages. It’s the least romantic thing that could ever be done.