The Moment I Knew My Marriage Was Over In our lifetimes, we say goodbye to unexpected people in unexpected ways. Dana Gornall courageously pinpoints “the moment I knew my marriage was over.”

Things were never perfect. There was always a gap. There was always this space between what I wanted and what I had, but I tried to pretend that didn’t matter. Nothing was perfect, right? But life leading up to that night had gotten more and more intense.

You remember, Dear Heart. We had babies. Those were long days and even longer nights and I walked around in a half-awake state with swollen breasts and messy hair. My once flat tummy now bore an angry scar and I didn’t fit into my jeans or even my shoes. I felt ugly and fat and I told everyone I didn’t care, but the truth is that I did care. And I was oh so stressed. I couldn’t keep up at work and I couldn’t keep up at home and I felt like I just couldn’t do enough.

I was so tired.

It was then that I wanted you to help me. I wanted you to be there—not just to change diapers or stay home from softball practice so I could sit for a few minutes, but to be my partner. But you know what, Dear Heart? I am a very stubborn woman and I hated admitting I needed you, so I didn’t push enough.

As the years went by I felt incredibly alone. And then your sister died and we took in our niece. She was so broken, you know. Who wouldn’t be to lose a mother and never have a father that was present? I tried so hard.

I tried to be everything to everyone; all the while the gap that defined our marriage from day one grew farther and father apart. But even then I felt like maybe I could do it. I could hold on to both parts of the things I wanted and the things I didn’t have and I would be strong enough to keep it from spreading any further.

When you started getting jealous, I have to tell you that a part of me liked it. It was wonderful to have a little of your attention after feeling exhausted and fat for so long. I suppose I should have seen this as a warning; but instead, in a twisted way I was flattered. Maybe you were still attracted to me? Maybe you still wanted me? Maybe you could still see beyond what I felt like and see the woman I was inside buried deep beneath all of the messiness?

I pretended not to see some things during that time. The clipboard I found in the basement that tracked the times I came home and the times I left, the sneaking up on me when I was at the computer—I blew those things off even though somewhere inside I knew something wasn’t right.

Being asked to interpret that concert was exciting. It felt like an adventure—something that would be a once in a lifetime event. My job had become ordinary and mundane and this was so out of the ordinary. I had been craving out of the ordinary for so very long.

I don’t know who called me that night of the concert. What I know was that up until that point I was feeling pretty good. I was looking forward to an evening of fun with a friend and a night off from being the person I was—a chance to do something different.

You called me at work, Dear Heart, and that was terrible because you know how hard I try to stay in the lines. The lines are critical because they keep everything in order and you blew those lines apart when you called me. I could no longer pretend.

Up until that point I thought I had a piece of me that still existed apart from you, and that the rest of me was us and our children and our home. With that one phone call you smashed that tiny part of me into nothing. I no longer knew who I was or what I used to be and who I would be when this was over. And what does one do when she has completely lost herself? Where does she begin and end?

You told me I couldn’t go. You said a lot of things that night I couldn’t believe I was hearing—things that made me feel like what I wanted and the person I was no longer mattered. You made me feel like I was a child that was being punished and for awhile I began to question my worth. I felt myself fade into a distorted image of all the people I thought I was and all the people I was told to be.

But somehow things fell into place and you agreed to take me that night. This wasn’t the original plan, but I took what I could get because that was all I had—or at least I felt that was the only choice I had. It’s funny, Dear Heart, how sometimes we can only see the things we think are true and real, yet there is so much more we are closing our eyes to. I think both of us could only see certain things that night. I often wonder how different it would have been if we would have really let ourselves see beyond that, or if we could have found a way to maybe really look at each other that night. I don’t mean look at the physical beings that we were, but to look at the heart beating, dream seeking, star chasing beings that we really were right then. I wonder if anything would have changed in that moment?

But we didn’t do that, Dear Heart. We only saw that neither one of us could see what the other wanted.

The car ride out to the concert was quiet. I didn’t know what you were thinking, but I no longer cared. I just knew I needed to rebuild the parts of me that I had lost. It occurred to me that maybe the man who called our house that day was my client’s husband. It turns out she was deaf, but he could hear and maybe he wanted to know something or ask something. But I didn’t care who called my house that day.

It no longer mattered.

Because that night, as I stood on the floor letting the music rock through my body and into my head and out of my hands, I let go of those two pieces of the things I wanted and the things I had. I had been holding onto them for so long. I let each one go and watched them float above me like two balloons as the crowd sang and my eardrums pulsed.

It was over, Dear Heart. I’m sorry I couldn’t be strong enough for the two of us. But that’s the thing about partnerships—they only work when both are holding on.

It took so long for me to really leave. From that night of being smashed into pieces till the day I had the courage leave, I slowly gathered strength. I realize now that none of this was your fault or mine—but was a dance of give and take that got out of hand. Both of us had these tiny little cracks we thought we could pretend were not there. There is a funny thing about cracks, Dear Heart. If you aren’t careful they can destroy an entire foundation.

I wish you a future love that will help you be a better person. We both grew from this, I know. When you smashed that part of me, I became a new person. Broken, hurt and somewhat destroyed, I became transformed.

And so maybe one day we can find a place where we fit in the space that was left behind. Maybe we can be friends again. Is it wrong that I want that? To know you again without the strings that were tied too tight? I don’t know. 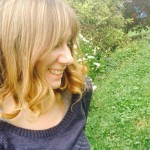 Dana Gornall is the co-founder of The Tattooed Buddha and mom of three crazy kids and a dog. She has been writing stories since she could put words into sentences, and is completely in love with language of all kinds. The need to connect with people on a deeper level has always been something she strives for and finds fulfilling. Whether it be through massage, writing, interpreting or just chatting with a good friend, she finds bits of enlightenment in those connections. If not working or writing, you can find her standing outside in the dark night gazing up at the millions of stars or dancing in the kitchen with her children. You can also see her writing on elephant journal, Be You Media and Rebelle Society. You can connect with her on Twitter and Facebook.