5 Surprising Reasons Why Men Pull Away Have you ever been left wondering why that great guy hasn’t called you again? Well, wonder no more. David Oragui is here to tell us why men pull away.

So you’ve just met a great guy who you feel like you have a great connection with. He’s attractive, smart and fits into your definition of “tall, dark and handsome.” You’ve probably been speaking with him for a while, but you’ve noticed something quite strange about him—the time it takes for him to respond to your messages and return your calls doubles with every interaction.

He’s pulling away from you isn’t he? What could it be? Is it the way you carry yourself? Your fashion sense, or the way you eat? Or maybe you had bad breath on the first date?!

In this article, I’ll be highlighting the five most common, yet surprising, reasons why men pull away.

1. You Wouldn’t Let Him Pay/You Expected Him to Pay

During the courting process we’ve been conditioned to believe that men should be providers and women are caregivers and nurturers. This division of labour between the sexes has become a staple in nearly every walk of life, most notably, during the courting process. Despite society’s attempts to abolish traditional gender roles, many men still feel more inclined to “foot the bill;” as it is still considered a good gesture, and does nothing but increase our chances of being in your good book.

However, something I’ve noticed men despise about their dates—it’s when their date expects them to pay for the meal, because they’re male. This doesn’t just pull them away, it turns them off. This problem manifests itself if they feel like you haven’t appreciated their efforts. Don’t be that girl. The first impression you give is usually the only impression you’re remembered for, especially if it doesn’t get past the first date. Most men aren’t so keen to fund the lifestyle of someone they’re not sure what their intentions are: “What exactly does she want me for me?” Or, “Is she only after me for my money?”

On the flip side, some men will pull away just as much if their date strongly insists that they must pay their own share. As callous as this may sound, most of us have egos bigger than Mt. Kilimanjaro, yet are as fragile as a fly. Trying to assert dominance in this situation may make your date run away. Even though you’ve done nothing wrong. Yes, I confess… we can be just as confusing to you, as women are to us.

How to avoid this: don’t make the novice mistake of bringing no money with you, more importantly than that, ask him how much money you should bring. His response will show you whether he intended to pay for the meal from the get go, or just for his share.

Society has branded men who are against marriage as commitment phobes. However, most men do indeed want to get married. We just want to get to it in our own time. This remains the case even after a number of years. That said, who has time to wait for years before finding out whether their partner wants to get married? 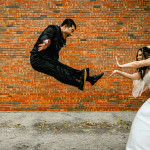 When you’re in a relationship and things are going well, you want to know whether it has a future. You’ve probably been dating a while, but you’ve found yourself in a sticky conundrum. You want to push things forward, but you’re unsure if your guy wants the same. Some men aren’t ready for that level of commitment, and some men will never be ready. I’ve known women who have dated men for eight, even ten years, waiting and waiting for him to propose. Much to their disappointment, they find out that he enjoyed the current setup they have and doesn’t want things to change.

Remember that communication is key to building healthy relationships, so ensure you figure out what each other wants before taking things further. This isn’t to say that you should turn up in a white dress, as if you’re auditioning for Frozen: The Musical (you know it’s happening), on the first date. However, as you’re getting to know someone and during the course of your relationship, you need to ask questions pertaining to your future and whether you want the same things in life?

Finding out what he wants from life, and where he sees himself living or doing, will give you a good idea of whether he really wants to get married. Simply talking about marriage as a concept in unrelated conversation is more than enough. Never assume or expect him to propose, it just might not be what he wants, and thus you will get hurt.

3. You’re Trying Too Hard to Be a Lady

Guys are well known for wanting sex. Some of us long for that kind of physical intimacy. You’ve met the perfect guy, yet you’re trying your best to show him how much of a lady you are. Truth be told, any dating rules you follow which suggest you wait for specific amount of dates will do more harm than good for your dating life. You should have sex whenever you feel comfortable having sex.

However, stringing a guy along for months on end, just to “make him wait,” will inevitably pull him away from you. Many people say that if you’re dumped for having sex soon enough, then he wasn’t worth the hassle in the first place. Whilst this is true to a certain extent, attaching a timeframe before making love with someone you care about could do the same.

Don’t have sex if you’re not comfortable with it, or if you feel pressured to do so. On the other hand, don’t lead someone on with the prospect of having sex with you as if it’s something “he must earn.” It will deter him from wanting to be in your presence and will provoke him to run for the hills.

4. You Assume You’re the Only One

When you’re getting to know a guy who you’ve been on several dates with, things are progressing well and you finally feel like you’ve found someone who could be right for you—that is, until you’ve found out he’s been going on dates with other girls. Whoops.

Only problem is, at what point did you discuss exclusivity with each other? That conversation never took place did it? Things just ended up how they were right? Been there, done that. Being upset that he’s seeing other people is understandable, however, you’re both at fault for not being transparent and communicating clearly to each other what you really want.

To clarify even further, check out my video on why communication is so important:

This lack of communication is the perfect example for why feelings get hurt. He’s a bit insensitive for not letting you know that he doesn’t want anything serious at this time. However, it could be argued that it is none of your business what he is up to. Some may even brand you as deluded for thinking that men want long term relationships at your age. However, research tells us this is anything but the case. Men do want relationships, and are not commitment phobes.

In my previous article about the ugly truths of online dating, I shared a story about how my current partner would get rebuffed time and again, simply for stating that she was a feminist. She would have built rapport with multiple men. They would ask her what she studied and what she’s interested or into. The second she mentioned she was a feminist (in passing, mind you)—guys stopped responding and sending her messages.

This didn’t stop me however; one of my best strategies for getting potential suitors to respond to your messages is to talk about something they’re emotionally connected to. I did this with her and viola, here we are today. Moral of the story? Mention it, even if it pushes them away.

If there is something in your life which is important to you, have no shame in making it known. You’re on a quest to find someone who shares your values, beliefs and interests. What better way to cull the list of characters who would probably waste your time and keep you further away from achieving your goals.

You may find it surprising why a partner (or potential partner) has pulled away, yet you must always remember that not everything is in your control. Focus on what is in your control, and you will attract the type of people you deserve to have in your life.

David Oragui is the CEO & Founder of The Balanced Life Academy, an organization that teaches important life skills for everlasting success in the 21st Century. He is also the lead practitioner and has taught over 160 people how to inject balance in every facet of their lives, from their physical and mental health, to their relationships, career and material wealth. Learn how we empower people to make positive changes in their life, through the life skills we teach.