What it Means to Love a Musician 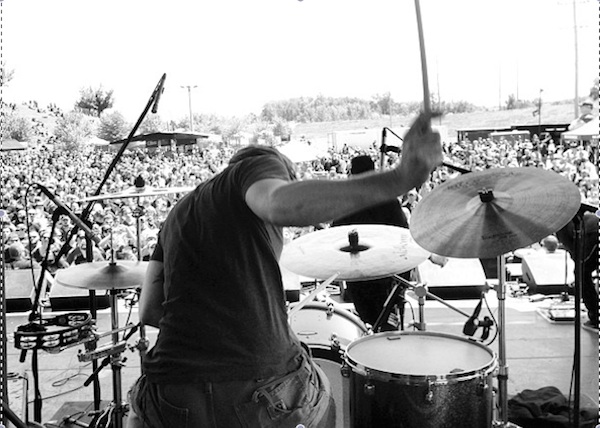 Love comes in many forms, but few are so intoxicating as that of a music man. Sara Crolick sings the highs and lows of what it means to love a musician.

“Without music, life would be a mistake.”
– Friedrich Nietzsche

When you fall in love with a musician, it will wash over your insides like a force you’ve never known. You will marvel at its impact and find yourself changed in its wake. What was that? you’ll ask, and there he’ll* be: your very own, bonafide music-maker.

You’ll fall for his presence, his charisma and confidence. You’ll feel powerful and sensual and creative when he’s near, like glitter has been embedded into everything in your waking consciousness—quite suddenly, you will see the world how it was meant to be seen. For if ever there was a connection to the ethereal, therein music lies the conduit.

A musician doesn’t leave music on the stage, that’s his special power: it pumps through miles of veins. Stretched end to end, those channels can wrap the globe, so it’s no wonder that his very pulse stirs you so. As he moves through rooms, it fills the space around him. As he sits still, it buzzes over skin. Music is in his heart, his speech, his gait and his smile.

That’s what you’ll fall for.

And if you’re lucky enough to find a music-maker who is kind and intelligent and witty beyond his charm, you’ll hold onto him. You’ll wonder where he came from and why the universe chose you of all people to be his.

You are the musician’s wife—you are as backstage as it gets.

The life of a musician is a many-fabled thing. He spends more time driving, handling gear and waiting than he does playing, partying or tending to fans. Fettered by a battered van, stretches of highway and rest stop after florescent-lit rest stop, the musician knows boredom as intimately as adventure.

But to see him off on these experiences—tedious or incredible as they may be—will weigh heavily on your heart.

You will say goodbye to him again and again; at first, it will seem easy, and soon after, impossible. Your heart will tighten days before the departure, protesting as forcefully as she can. You’ll face resentment and a fear you didn’t know you could harbor. You will feel stupid for being so sad and despise yourself for not being stronger—but gone is gone, no matter how many miles separate you, and you prefer him here.

You will learn though, you don’t have to fear the road. Anticipation will outweigh the absence. You’ll feel the distances extend and recoil as he weaves across the country—that’s how connected to his heart you will be.

So to love a musician, you must learn to be alone.

You’ll be the man of the house in his leave. You’ll take out the trash. You’ll fix things, you’ll cook, you’ll clean. This will be necessary. When he’s on the road, you will attend soccer games, run school drop-offs and pick-ups, read bedtime stories and do nighttime tuck-ins, alone.

You won’t stop from the moment you wake up to the moment you sleep. You’ll wonder how much you are capable of handling, then realize it doesn’t matter much because these things have to be done. This is what it takes to love a musician—these are the ways you support a dream.

You’ll hoard moments to share. You’ll be prepared when you receive that quick-phone call; but when the moment comes, you’ll feel rushed and silly and ill-equipped to make him understand that life at home is wonderful, but he is conspicuously absent. You’ll choose words delicately—he needs to know he’s missed without arousing guilt. You’ll stumble a bit when you follow his tour narratives with domestic odds and ends that feel small and unimportant in comparison.

But you’ll understand over time: there is no such thing as unimportant. Tour will exhaust him and he’ll forget what normal feels like. You are his normal, and he needs to be reminded of you.

After a few dozen farewells, you’ll begin to appreciate it more: the quiet, the freedom to watch as many old movies as you and your cat can stay awake for. You’ll use sleepless hours to write and sip tea and think about the future you’re making with your music-maker.

When your eyelids grow heavy in the earliest hours of the morning, you’ll button up the house—checking and double checking that you and your children are safe for this night. You’ll retire to a big, empty bed with cool sheets. You’ll sleep a little closer to his side. You’ll imagine crawling into his shirt pocket and you’ll button yourself up, close to his heart.

Your own heart will unfold like truth while you dream; she’ll speak to the stars on your behalf, asking them to erase the miles between you.

And when he returns home from the road, you’ll follow him around the house like you haven’t seen him in years. Like you’re sure that at any moment he’ll vanish before your eyes. You’ll appreciate all over again what the house feels like when it’s infused with his music. You’ll notice details: the way he stands, the way he positions his body while he cooks—always weighted a little more to the left. You’ll notice the way he smiles when he talks about band pranks, great rooms and memorable fans.

But when he’s home, late nights mean hours of laughter—to the point of tears—and intense conversation. You’ll solve problems big and small. You’ll talk about your kids, about human nature, about culture and science. You’ll make connections between his knowledge of music and your knowledge of literature. You’ll talk about his career—you’ll know his thoughts and options so intimately, you’ll treasure them as your own.

You’ll know not to base successful nights on money-earned, but on attendance, reception, on how the room felt. Because it is the craft that matters. Hone the craft and the rest will follow. You must trust the process—more fervently than even him.

Love a musician and love the unpredictable, the chaotic and the untraditional.

Loving a musician means loving his work, even when it’s inconvenient, even when it isn’t lucrative, even when it seems crazy, illogical, impractical. Understand that without the art he is not whole. Abandoning the craft would be abandoning a very piece of himself—the most honest piece he has.

Offering your heart to this man means knowing that the 30 minutes of practice, the 15 minutes of Youtube research, the not-talking during the four-minute song he chose for the car ride, these minutes matter.

They’re the meditation, the grounding, the breath required to sustain a healthy sense of connection.

Time changes; you must accept open-ended timelines and an inability to commit to long-off engagements. Appointment times, lunch times, meet-for-coffee times are soft suggestions when you’re running on musician time.

Love doesn’t necessarily translate to traditions like marriage and honeymoons, because ‘tradition’ will take second seat to exploration and expansion. If this isn’t a deal-breaker, you’ll have a wild, beautiful, intense romance with your music man. You’ll celebrate each other without ceremony (again and again and again).

You’ll experience passion and spontaneity alongside depression and heavy contemplation. The art will abuse you as it abuses him, but then he’ll be rewarded with a breakthrough of any degree and you’ll both forget anything was difficult.

You must share your musician with total strangers too. This can be difficult, but hold it in your heart that he returns to this home, always. And the time you invested in having the space he returns to tidy won’t go unnoticed. When he drops his travel bags to the floor for the cat to investigate, when he removes his shoes with animated grunts and sits on the couch you’ve watched a million movies together on, he’ll sigh deep from his belly and you’ll know he has been waiting for this moment since the minute he left.

He’ll be home and you’ll smile and laugh and kiss that kind of over-the-moon, I-can’t-get-enough-of-your-taste kind of kiss. You’ll laugh and say, that was crazy, right?

But you made it. This life is crazy, but you’d hate to know crazy with anyone but him, even on the worst days. Because he makes your crazy seem less crazy—somehow tolerable, or normal, or incredible. And you’ll look in his eyes and say, I love your crazy and miss it when you’re gone.

And when he plays close to your home, it will be essential to get out to see him. This might seem silly, as it’s part of the reason you fell in love with him after all. As years pass, you’ll accept that you can’t make it to every show, and you’ll grow comfortable in your routine. You must make the effort; you must always make the effort to go out and see the magic—the gold he spins from simple wool.

While you watch, you’ll fall in love again. You’ll feel so much pride that your rib cage will splinter trying to contain it.

You’ll be so in love with him that you’ll hardly be able to wait to get him home that night, where you’ll stop sharing and devour him instead.

After the load-out is complete, and you make the sleepy drive home, you’ll realize you aren’t so worried about sex after all. All that matters is that this man, your man, is lying next to you.

The man that crowd watched is home safe and he’s drifting as you drift to that heart space between waking hours.

The next morning, you’ll go about your day. You’ll sip coffee and write a little. You’ll listen for the sound of his footsteps on your bedroom floor, but they won’t come. Loving a musician means falling in love with morning hours because those will be yours—for a musician will chase sleep as fiercely as he chases success. He won’t know it, but you’ll watch him sleep. You’ll smile as he turns over and you’ll listen to the cadence in his breath.

You will experience life in neon.

You’ll hate everything about this life, only to contradict yourself a moment later with crippling gratitude because you’re so in love with this man and the life he’s brought with him.

You are the clean-up crew, the architect, the engineer, the muse.

You are the partner of a musician, a sometimes-preposterous feat.

And on the good days, your happiness will permeate the darkest crevices of this insane life. Your ability to celebrate one another will explode any doubt you’ve ever had and you’ll dance together as the smithereens fall around you like confetti.

This is love, you will exclaim to the world—and anyone who looks in on you will know it is so.

This article was originally published with elephant journal.