One of the most popular books that speaks about mindfulness is Elizabeth Gilbert’s Eat, Pray, Love. One of my favorite scenes is where she is sitting on the bathroom floor in the middle of the night in despair. I often think of it because I feel it is valuable imagery. She is praying to God asking Him what she should do about her marriage that seems to be falling apart and the message that she hears from him is “Go to bed, Liz, go to bed.”

It is so simple, but in my mind, makes perfect sense.

Logically speaking, at night, our perception of reality is often blurred. Whether it is due to exhaustion, the toxins we took in during the day, or the pull of energy from multiple directions away from our center, it happens.

Recently, I was reminded of this again when I had an opportunity to hear Rajashree Choudhury speak. Unfortunately, she has been in the papers often over the last year, as her husband is being accused of scandals. She is the wife of Bikram Choudhury (of Bikram Yoga), but she is her own person, a wise yogini and an amazing yoga teacher both for children and adults.

Rajashree told us about an exercise where every morning you write down everything you would like to accomplish. At night, write down what triggered you to possibly get upset or frustrated during the day, but don’t look at it the next day. After a few days, look back and read your entries. You will see that the mornings are full of optimism, hope, and things most likely accomplished. Then, the entries from the evenings with the items that frustrated you, they have blown over and/or have gotten resolved.

I thought this an amazing exercise because so often we go to bed with frustration at some issue or another from our day. We often think we haven’t accomplished as much as we had hoped, or we are like Elizabeth Gilbert, where we are crying on the bathroom floor, figuratively, if not literally.

Using this exercise to reflect on what we have actually done and to keep feelings of optimism throughout the day is important. It is what keeps us going and helps us push for that next goal. It encourages us to call that prospective client, email that potential mate, or stretch for a goal that we may think impossible.

A situation from my life, for example, happened last month when I met my new boss for the first time over the phone. I work remotely so it was not uncommon for us to do this, but often with speaker phone, things get lost in translation. As I presented my work, I quickly understood her to question it, doubt it and take charge of what projects I had been running.

When I got off the phone, I felt lost and disillusioned. How could she make me feel so weak in a matter of minutes when I had been feeling so strong for the previous months that I had been working with this company? For the next few nights, I would wake up at 2 a.m. with worry that she was speaking badly about me, that I was going to get fired, and/or other ego-driven concerns.

A week later, I was scheduled to fly to Phoenix to meet this new boss, but even as I arrived at the airport, I was still scared. I met her, shook her hand, and still I wasn’t getting the feeling that she liked my work.

As the week progressed, Jennifer and I got to know each other better. What I understood for skepticism of my work was purely confusion with senior management on the direction of our strategy. What I thought was a lack of confidence in my projects was actually an excitement on her part to take on some of the responsibilities because she liked doing them. Running the video production of our company shoot was something she had done in the past and was something tangible that she could manage amongst the chaos of C-level leadership.

When I flew back home that week, I thought again about Elizabeth Gilbert and Rajashree Choudhury. I thought to myself how silly it was that I lost sleep worrying about the relationship with my new boss. Not only would this pass, but there was a more logical answer as opposed to my jumping to self-conscious conclusions.

Since then, I have seen that writing my goals for the day only takes 30-60 seconds in the morning and it always makes me feel so much better when I look back. When new frustrations come up, I realize that by tackling them head on, they will also be resolved sooner rather than later. The distance of time makes them look like a piece of cake, and for this reason, I can’t wait to get there. 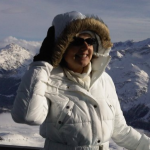 Ingrid is a yoga teacher and wellness consultant in Los Angeles, Ca. She loves walking her dog, Maggie, at the beach. Not only does Maggie love it, but she finds it to be a great place to rest the mind. After many years of working on Wall Street in her previous career as an engineer and business analyst, Ingrid is happy to be able to do what she loves by working in the wellness industry. When she's not teaching yoga, she's helping fitness and health-related companies find a stronger voice in the world via social media. Maggie approves since that means more time sitting by Momma's feet while Ingrid's on the computer. Ingrid can be reached via her site, IngridvonBurg.com, Twitter, Instagram and Facebook.